Harbutt – One Hundred and Twenty

A Celebration of 120 Years of Plasticine, William Harbutt and Bathampton 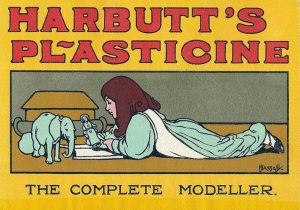 Museum of Bath at Work

10.30 Welcome and Introduction – Main Hall. Bring cakes for the cake competition. There are prizes for Most Tasty, Most Like Plasticine (not in taste) and Generally Best Looking! Refreshments all day.

10.30-12.00 Working with Plasticine – A workshop for young and old led by actor Doc Watson as William Harbutt. Come along and work with Plasticine to make an entry for the sculpture competition! There are prizes for pre-school, school and grown-ups.

12.30 Judging of Plasticine Sculpture and Cakes by Jess Mckillop of Aardman Animation, William Harbutt and a representative of the Harbutt family.

1.15 p.m. Awarding of Prizes and Presentation to Bathampton Village Hall of Medallion of William Harbutt.

Tea and Cakes all afternoon. Other refreshments are available!

6.00 p.m. Showing of Aardman Animation films A Grand Day Out, The Wrong Trousers and A Close Shave. Take a ticket for this when you arrive during the day!

This year marks 120 years since the registering of the trade name Plasticine by art teacher William Harbutt in 1897. Since then Plasticine has been exported all over the world although it ceased to be manufactured at Bathampton, where Harbutt opened a factory in 1900, since 1983. The Bathampton factory was for 83 years the only place on Earth where the product was made. The contribution of local residents in the village in working at the Plasticine mill in High Street and the determination and genius of William Harbutt in developing and managing this business is being celebrated on June 17th with a day of events at Bathampton Village Hall.

After many experiments the first batches of what would become Plasticine were made – in the basement of the Alfred Street family home in 1897. At first the material was used at Harbutt’s own art studio in Milsom Street but soon was being sold to local art shops and suppliers. Originally only available in grey, it was later made in red, blue and yellow. Very soon the domestic scale of production – in which all members of the family were involved!-was overwhelmed by the demand and Harbutt began considering closing the art school and investing in factory production of Plasticine. With help from a relative in north east a former steam flour mill was purchased in Bathampton and on May Day 1900 the first factory manufactured Plasticine was made in the village. The mill site included a five storey mill, with outbuildings, on the banks of the Kennet & Avon canal and the miller’s house – which became the Harbutt family home.

After William Harbutt died in 1921, whilst on a lecture tour of the United States, his children, and later grandchildren managed the business and it continued to flourish until its closure in 1983. This was despite fires at the premises including a disastrous one in 1963 which completely destroyed the factory. Whilst Plasticine has ceased to be made locally it is still available and the most high profile user of this material is Aardman Animation who have used it, in films such as Chicken Run and The Wrong Trousers.

On June 17th the Museum of Bath at Work in collaboration with local residents and organisations in Bathampton has organised a programme of events. At 10.30 Doc Watson, Bath’s very own William Harbutt impersonator will be leading a workshop on the how, what, where and when of Plasticine and describing it use and history – all ages are welcome! If you are interested in taking part in the Plasticine workshop turn up at 10.30 if you are inspired to make a sculpture during the workshop you might like to enter it for the competition being judged at 12.30. There are three classes of entry for 1. Pre-school Children 2. School Children and 3. Grown Ups! There are prizes which will be awarded by Jess Mckillop of Aardman Animation at 1.15 p.m.

If cake making is more your line you are invited to submit a cake for judging at the same time. The three classes of entry are 1. Most tasty 2. Most looking like Plasticine (but not tasting of it) and 3. Generally the Best Looking. There are prizes for this too!

You are invited to submit a model made of Plasticine for a competition held as part of the Harbutt 120 Celebrations at Bathampton Village Hall on Saturday June 17th 2017.

During the morning a workshop will be held for children and adults at which you will have the opportunity to learn how to use Plasticine, its history and be invited to make a model. If you wish you may submit your model for judging in three categories and there is a prize for the winner in each. The categories are:

You can only submit an entry for one category.

The model must have been made on the premises in the morning of June 17th 2017.

The model or sculpture can be on any subject.

The model or sculpture must be submitted for judging by 12.00 noon on June 17th in order that the judges have sufficient time to inspect the models.

The judge’s decision is final.

You are invited to submit a cake as part of the Harbutt 120 Celebrations being held at Bathampton Village Hall on Saturday June 17th 2017.

Your cake must be no more than 18 inches/45 cm in diameter. There are no restrictions on height!

The cake must be home made.

Your cake can be to any recipe, that is to say a fruitcake, sponge cake, etc

The intention is that after the judging the cakes be sold and eaten and the proceeds going to the Bathampton Pre-School Group.

Cakes should be brought to the Village Hall at any time between 10.30 and 12.00 noon. No cake will be considered after 12.00 noon in order that the judges will have sufficient time to inspect the submissions.

You should put a ticket or note with your cake identifying with a telephone number so we can contact you if you are not present when the winners are announced.

The judges’ decision is final.